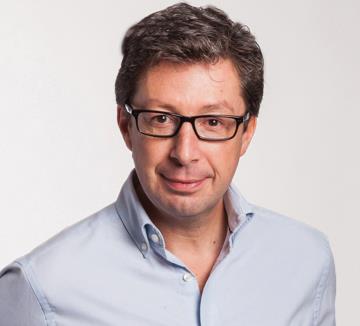 I know I really should say that joining Netskope, nearly seven years ago, as Director of Sales and Engineering for EMEA and LATAM was my big career break, but looking back over my 25 year+ career, I would have to say becoming one of the first Cisco Certified Internetwork Experts (CCIE) in Europe back in 1997, was a key moment. At the time, and still today, CCIE accreditations were accepted worldwide as one of the most prestigious networking certifications in the industry. It was a door opener to establish myself as a leading networking guru. Having the accreditation enabled me to get my first role in a start-up vendor. I joined CacheFlow as its first Systems Engineer in Europe. CacheFlow later rebranded to Bluecoat and was acquired by Symantec in 2016.

I am a huge motorsport fan and have grown up watching Formula 1 (F1). For me, nothing beats the excitement of watching cars that have been designed to a hundredth of a millimetre /or gram, race up to 200mph around a track where the limits are so close, any slight movement could result in a disaster. Former F1 World Championship winner, Nigel Mansell, is one of my hero’s. No driver fought harder to get into F1 and few fought harder when they got there. Mansell was determined, aggressive, daring and one of the most exciting drivers to watch. He physically wrestled his cars around the track. Mansell left a lasting impression on me, showing how determination and persistence would deliver ultimate success.

If you had to work in a different industry, which would it be?

It may seem obvious from my previous answer - it would have to be the Automotive industry. I am a petrol head through and through. If I was choosing a career path now, it would be mechanical engineering, rather than computer science where I started.

I would invest it in property. Maybe even stretch to one of the properties at Escapade Siliverstone(!), but only because I can’t buy public stock in Netskope…yet…

Where would you live if money was no object?

Wow, what a thought! My dream would be to split my time between the UK and Italy. I would always have roots in the UK as this is where I grew up and where my family is. But, to be able to also plant roots in Italy would me amazing. I try to travel to Italy regularly (obviously not managing that with the current travel restrictions). The Northern Italian lakes are my favourite part - Lake Como is particularly special to me. I once stayed in a hotel room from which Sir Winston Churchill painted the lakes. It is said that Italians have mastered living happily because they have perfected the blend of food, family and good humour. They could be right, I certainly love the food, wine and family-centric life that is associated with the Italian culture. And of course, the more reliable sunny summers.

The Beatles every time. Lennon and McCartney’s lyrics capture so many emotions and provoke so many memories. Although the songs were written from their experiences, people can interpret them in a way that’s personal to them - that’s the magic that makes their music timeless and so well loved across generations.

What’s the best piece of advice you’ve been given?

I was fortunate to be given this advice early in my career, and it has kept me in good stead ever since; “Always treat people the way you like to be treated and lead by example.” I can’t say that I have succeeded in always following the advice, but it’s definitely a code I try to follow and something everyone should bear in mind.

If you could change any law, which would it be?

I would like the UK to mimic some states in the USA and allow people to drive from the age of 16. It may not be right for everyone, but it would have meant that I would have avoided riding motorbikes and got straight on to driving cars. Like many other teenagers, at 16 years old, I thought I was invincible on 50cc moped. Only time would teach me that ice and skinny wheels are not a good mix, especially when combined with not looking where I was going. Unfortunately, the car in front marked the end of the road for me.

What will you miss about Donald Trump?