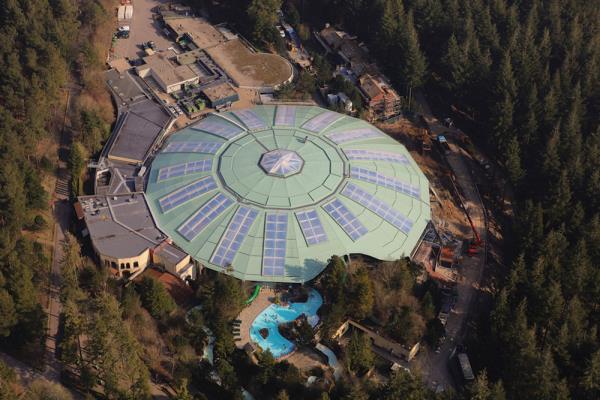 Construction company SDC is responsible for major projects across the UK, from replacing a 100 metre dome-shaped roof for Center Parcs (shown above), to constructing the £26m Maxwell Centre at the University of Cambridge. At any one time there can be 20 major projects on the go, with around half of the staff at the various sites who need to access resources and liaise with the company’s head office in Bedford.

As SDC’s IT infrastructure was five years old, IT manager Matt Clifford-Simmons wanted a complete refresh to ensure reliability for the next five years and improve support for those away from the office.

“This was my second big infrastructure refresh since joining SDC, and each time we need more capacity. Email, which is crucial for both customer and internal communications, was a particular concern. Users were continually emailing large documents to each other, which meant they were struggling to stay within their mailbox limits, and our backup was becoming larger and larger. If our onsite Exchange server fell over, it would have a major impact on the business.”

SDC has a small IT team and has turned to EACS for support on major projects for several years. After researching potential solutions, Clifford-Simmons called the Huntingdon-based managed services provider to discuss his ideas. EACS agreed that Microsoft Office 365 would be the best way to increase user efficiency and solve capacity issues, and advised him on best practice for the implementation.

The final project comprised Microsoft Office 365, with Exchange Online providing business-class email, Skype for Business for online meetings, OneDrive for Business for file storage, and SharePoint Online to support document sharing. Security was provided by a Sophos UTM firewall, supplemented by Mimecast for advanced email services such as protection, continuity and long-term archive.

EACS began by replacing the servers and moving SDC’s virtual environment to a new SAN. It also installed switches to make full use of the capabilities of the high-speed connections between the servers and the SAN to enhance performance.

Next, the firm configured a hybrid Exchange environment with email flowing through both Exchange and Office 365 via Mimecast. This meant a few employees could test the new system, before the remaining 300 were migrated onto Exchange Online and the old server decommissioned.