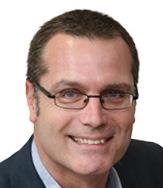 What was your big career break?
Moving into electronic payments and Public Key Infrastructure off the back of the Identrus(t) scheme when at IBM in the mid-90s. I ended up working on a huge global deal for a large bank where we needed to bring in a number of complementary technologies, most from pre-IPO start-ups as it was fairly cutting edge at the time. This opened the opportunity to consider a radically different work environment and, after 10 years at IBM, I felt the time was right to take the plunge and work one of these “new wave” businesses. This led to a number of first man on the ground in country/region roles; all of which have been great fun and packed with wonderful memories and experiences, leading up to where I am today.

Who was your hero when you were growing up?
As a Manchester City fan, I idolised the late, great Colin Bell. I’d just started going to football and Colin was in a different class. Unfortunately, he was badly injured a couple of seasons later and was out for quite some time. I can still remember the crowd noise on his return, but he never fully recovered to the player he once was. I suffered some barren times in those early years and beyond. However, I now feel privileged to watch an exceptional team, both footballers and managerial staff, and can see some of Colin’s attributes in different players – Rodri/Bernardo’s work rate and De Bruyne’s vision for example. We still sing his name

What’s the best piece of advice you’ve been given?
Trust in you. That’s not to say don’t trust anyone else, but you need to back yourself first. I find myself passing this onto my kids now. Reminding them to have faith in themselves, bear in mind positive past experiences, trust in their gut and, 9 times out of 10 (or hopefully more), they will make the right decision for the right result.

What’s the strangest question you’ve been asked?
“Have you ever skinned a buck?”. I was 17 years old and travelling through Canada and America. I ended up in Atlanta staying with family friends and we went to an Atlanta Braves baseball game. Half-way through, a man in the seat in front of me, and with whom I hadn’t had any previous conversation, turned round and asked, “Have you ever skinned a buck?” before turning back to his friend to continue their discussion without waiting for a response. I sat scratching my head for some time after. The answer, then and now, is of course “No!”

What would you do with £1m?
I would put it towards helping my kids buy their first homes. I have 4, so the £1m is easily spent. With the current state of the housing market, I’m not sure how else they will ever be in a position to own their own home before middle age at the earliest.

If you could live anywhere, where would you choose?
My wife would say Majorca, I’d say Portugal – so Majorca it is! To be honest, that would work for me too. We enjoy visiting both, as well as the Greek islands. We have simple tastes – sun, beach, relaxed way of living and good food.

If you had to work in a different industry, which one would you choose?
Mobile catering – I’ve always fancied the idea of setting up a food truck that serves up high-quality food that is slightly different from the norm, then travelling round, building a loyal following and having fun - like in the film “Chef”.

What’s the one thing you must do before it’s too late?
I often promise myself that, one day, I will learn to play the drums and join a band. I don’t have a musical bone in my body in terms of pitch, melody etc. so reckon drumming is my best bet. I’d hope to be the sort of drummer that is able to contribute equally to the overall song rather than just keeping time – think Dave Grohl, Reni, Matt Helders.