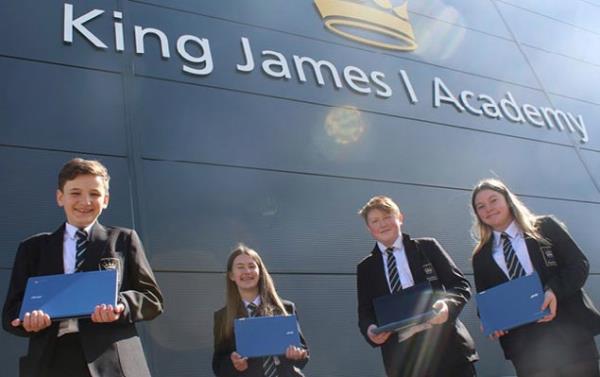 King James I Academy is a medium size academy and Sixth Form centre for students aged 11–18 in the town of Bishop Auckland, County Durham, with over 800 students in Years 7 to 11, and a further 160 Sixth Form students on roll.

Around five years ago, the school received funding through the Priority Schools Building Programme to replace one of its buildings with a new modern purpose-built set of classrooms as well as a refurbishment of its existing Grade II Listed building. This proved the catalyst to invest in a more modern technological infrastructure, with a reliable Wi-Fi network made up of 57 access points, and the then headteacher Mr Nick Grieveson (recently retired) made the decision to offer each new Year 7 student a Chromebook device.

About two years later – with the previous Year 7’s now in Year 8 using their Chromebooks, and a new cohort of Year 7’s issued with their own devices – the school also invested in RM Unify as the single sign-on access portal for all of their online software applications, and that made a huge difference to the user experience for staff and pupils.

The next decision was Google or Microsoft. Until this point King James was a Microsoft school, but with Chromebooks installed, it opened a new avenue of thought.

It was also time to look at the server infrastructure, with RM helping the school replace their servers with a RM designed Dell VRTX system with SAN and Backup – moving to CC-on-prem for remote access. By this point, the school had been investing in Chromebooks for several years as devices that pupils could use – initially for homework or as an extra resource in class. This ‘Chromebook Scheme’ was an initiative set up for each Year 7 cohort, with the aim that they would keep their devices throughout their time at King James. When the pandemic first struck and resulted in the first national school closure in March 2020 (to all but the vulnerable and children of key workers), King James mainly relied on its website and other platforms to set work for pupils to do at home. This was the best option at the time as not all students had access to a Chromebook or a device of their own.

It was at this stage that the school made the decision to audit student access to Chromebook devices for a more consistent learning strategy for remote learning. Parents had been asked to make a financial contribution in the form of a refundable deposit – in part to minimise the cost to the school, but also to ensure a joint commitment to such an expensive investment. This proved acceptable to most, with 95 percent of parents willingly paying the small deposit requested.

This was a significant project – to roll out devices right across the school – with a huge team effort supported by admin staff, IT technicians and a dedicated Chromebook liaison staff member (Laura Newton) who worked tirelessly to fill the gaps. By the end of September 2020, every student had a Chromebook. Whilst they continued to rely on parental contributions, the school also benefited from the DfE Laptops for Schools programme to provide devices for all, as well as Wi-Fi dongles for those with inadequate internet connection at home.

Under guidance from the leadership team, an internal champion was sought – a well-respected class teacher with a genuine vision for how this could work.
She researched the various platforms, as well as the pros and cons of each one. She looked at specific applications and identified opportunities such as Google Apps (now called Google Workspace) for Formative Assessment, Google Drive for students storing their work electronically as a long-term revision tool, and Google Classroom so all students could access remote learning resources and live lessons through Google Meet… concluding that this was the future of education and a space where King James could lead the way.

It became almost a production line – as the Chromebooks arrived from the various sources, the in-school IT team configured them to work with the necessary school software, cyber security and safeguarding programmes, before the project team allocated them to the next pupil in turn, ensuring they had been trained in how to use them through whole school tutorials, and had the necessary logins and passwords.

By the time the third lockdown came in January 2021, the school was probably in the best position it could be – it had a cloud-enabled network, staff and students had access to devices, they had a remote learning platform, and everyone knew how to use it. The school had also purchased the new RM Tutor software application for Chromebooks, which syncs with Google Classroom in readiness for students returning to school. This proved very helpful for teaching and learning, as well as monitoring students while they were working.

One of the consequences of so many pupils now online is ensuring that safeguarding and policies are up to date. For King James this was made easier through Google Workspace, as the functionality that goes with that enables the local IT team to be able to control what a pupil can and cannot do within Google Classroom.
For King James they also make use of the RM Tutor Programme which allows a teacher at the front of the class to see exactly what each student is looking at, so that it can spot if a student is going off subject (such as playing a game).

That said, there were still many parents with concerns and worries about how their child might be using the devices. Fortunately, Google Admin Console provides a complete history of what sites a child has visited and what they have done on that site, as well as blocking those that are considered inappropriate. Google Admin Console is a useful application, as it allows a school much more control over student Chromebooks - once each Chromebook is enrolled, it allows the school to lock the device if it is lost or stolen, displaying a customised message on the screen such as “Please Return to King James I Academy” and advising that the Chromebook will be useless to anyone else. For King James, it had made the decision to work with a national technology partner many years ago, and over the years, RM has supported it in many aspects of its technology journey, with that support coming to the fore during the pandemic – sharing advice and best practice from other schools facing similar challenges.

One of the most important bridges for the school was RM Unify – having a single log-on that opened the door to all of the software applications that a student would need – from their email to their homework, and from specialised music applications to being able to interact in a foreign language – it really did make it so much easier to get everyone on line in those early days.

For staff, it was CC4-on-Premise that proved the key application. Whilst they had it pre-pandemic, it was rarely used, but as soon as staff realised they could access all of their files and applications from home, it became a lifesaver for everyone. With CC4 it meant that the IT team could change people’s passwords remotely from home – again allowing them to keep the school running seamlessly despite the constraints imposed by Lockdown.

Based on the buzz that is evident at King James it is clear that it will not be going backwards. For the academy, learning is now “blended” – whilst they are excited by what technology can do, they recognise that it cannot all be done on Chromebooks – pupils still need to be able to write with a pen.