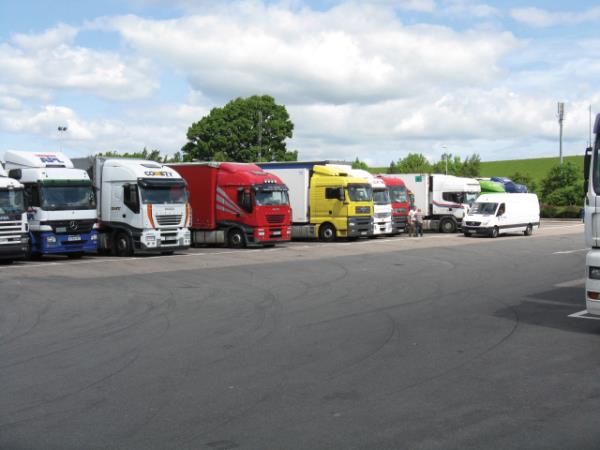 Overweight commercial vehicles are not only a safety issue (they are more likely to be unstable and put more strain on axles and tyres) but they damage the carriageway.

The damage caused by a load is roughly related to the load by a power of four and the passage of one legal HGV is roughly equivalent to the movement of 10,000 cars.

If the drive axle on a 2+3 articulated HGV is illegal, that single axle causes as much road wear as approximately 18,000 family sized saloons – 4th power law.

These sites will have the latest quartz sensors and cover all carriageway lanes to monitor the compliance of both heavy and light commercial vehicles.

To take forward this strategy a pilot site on the M6 Southbound (J27/J28) has been established with polymer piezo sensors in all lanes and an additional quartz sensor in lane 1. The pilot will run for 12 months and provide valuable intelligence about commercial vehicle traffic on the M6, the benefit of installing weigh in motion sensors in all lanes and the viability of using quartz sensors to accurately record vehicle weight.

The pilot site on the M6 started to collect data in June 2019. Summary anonymised data for each vehicle class is being collected. Lane 1 will collect data from for the piezo sensor and separately for the quartz sensor. The site sensors will be calibrated regularly and also checked against the DVSA weighbridge at the Cuerden check site.

The aim at the end of the 12-month pilot is to have a clear picture of the ANPR/WIMS technology and supporting processes that Highways England and DVSA should be installing at key locations on the strategic road network.