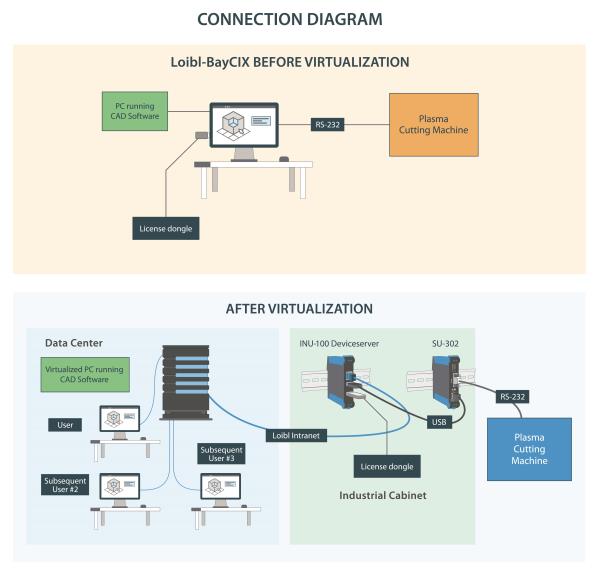 Loibl Förderanlagen GmbH from Straubing in Germany, is a manufacturer and seller of solutions for transporting bulk material.

From single components to complex systems, Loibl regularly modernises all areas of its operations. In 2018 this included upgrading laser, plasma and gas cutting system controls, as up until then, industrial PCs with older operating systems served this purpose.

“The control unit needed to be virtualised. This would mean that it would not be directly connected to the steel cutting machine anymore but via a software. This led us to the following questions: how can the software continue to control the machine? How do we virtualize an RS-232 connection? And how do we connect a USB dongle to the virtual system?” said Hermann Lehner, Operations Manager at Loibl.

To date, the control PC had been on-site with a direct connection to the cutting machine and was running Windows 7. The modernisation plan included an updated operating system and the virtualisation of the entire control command processing, utilising the RS-232 interfaces of the cutting systems.

The entire project was researched and planned by the IT systems and service provider BayCIX from Landshut in Germany. The well-established regional company provides individualised solutions covering the entire customer IT system, including security, infrastructure, and virtualisation. Partnered with 20 years of experience as a service provider, the BayCIX team were the ideal partner for market research and evaluation.

The first test setup was up and running in December 2018, with the entire test spanning for a total of 6 weeks. The IT service provider started with the virtualisation and cloud migration at Loibl. From that point on, a virtual machine on one central PC controlled the cutting machines. For transmitting the control commands, two industrial-type products from SEH Computertechnik GmbH, based in Bielefeld, Germany were chosen. Firstly, the serial to USB data converter SU-302 from SEH, converts the commands from USB to serial. Then the SEH USB Deviceserver INU-100 transmits the USB data across the network and enables the communication between the virtual system with the control software and the connected serial device.

Both SEH devices were also designed for installation on top-hat rails in control cabinets, which allowed for easy integration of all components into the entire infrastructure. The biggest advantage to Loibl was that neither the serial parameters nor the control software needed to be re-configured. The integration of the USB license dongles for the control software was not a problem either as they were connected with a 1:1 connection, identical to a local connection, so that all data was distributed fast and also "invisibly” to the user.

“We value the stability and flexibility of the entire system. It is comfortable to configure settings with RS-232, which is easy to use despite its age thanks to the SEH devices. The operators are also relieved that the older PC has been replaced and that it's time-consuming maintenance is no longer necessary” concludes Hermann Lehner.