There aren’t many more famous music venues than the Cavern Club in Liverpool.

Although the venue has since been demolished and rebuilt, it is a top UK destination, with a bar/pub and continued dedication to live music. 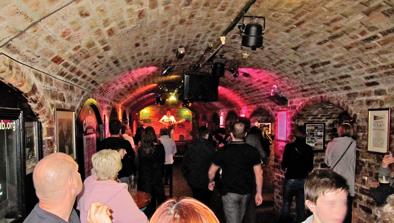 However, every business has to evolve in order to maintain its appeal and the Cavern is no different.

Nevertheless, the challenge was enormous.

As its name suggests, the building is a labyrinthine brickwork construction and the Wi-Fi signal died if you took a wrong turn.

This was only exacerbated by the high visitor density, which overloaded access points.

What’s more, the existing low-speed routers needed to be replaced with VDSL-capable devices that were approved for usage on BT networks.

“We want visitors to be able to connect instantly to social media and share their experience, but with no 3G/4G signal underground and with multiple pillars of solid brick construction, we had struggled to enable a reliable wireless internet service,” said George Guinness, IT manager for the Cavern Club, “We also wanted to take advantage of the higher broadband speeds available with VDSL, so were considering a router upgrade.”

To remedy this, Guinness approached a local specialist Lansafe.

Following contact with DrayTek at one of its roadshows, Lansafe proposed a system of 10 devices comprising Vigor AP-902 wall-mounted and Vigor AP-910C ceiling-mounted access points.

“When we started to investigate the requirements for the Cavern Club, it quickly became clear that a highly robust and manageable wireless solution was needed,” recalls Adam Baxendale, commercial director for Lansafe. “Basic standalone access points just wouldn’t cut it, so we looked at a higher-end solution from a credible supplier that could address the Wi-Fi challenges, help with the associated LAN infrastructure, and provide the VDSL router.”

Lansafe chose a DrayTek VSP-2261 PoE switch to connect and power the access points and a Vigor 2860 router with full BT compliance for both VDSL and ADSL connections.

The final stage was to implement ACS-SI - DrayTek’s central management system - which allows for all devices on the network to be managed, monitored, and controlled.

Finally, the Cavern’s users were able to connect to a minimum of four, or a maximum of eight, access points, wherever they were in the venue.