Net-Build® GmbH in Saarwellingen, Germany, was founded in 1999 by Mr. Patrick Bohn. Providing IT services as System Management, Business Solutions and Rack Hosting, the company today has 20 employees.

The increasing data traffic and demand for storing and protection of data in general, recently created a need for extending Net-Builds Data Centre capacity.

Managing a visionary and environmentally conscious company, Mr. Patrick Bohn was looking out for new and energy efficient solutions when he decided to build a new state-of-the-art Data Centre.

In the planning phase, Net-Build partnered with the local contractor E-TEC Power Management GmbH, that supplies turnkey Data Centre solutions with the highest attention on safety and energy efficiency. Together with Munters, E-TEC worked out an energy efficient cooling solution, based on Munters’ indirect evaporative cooling system Oasis™.

Located exactly on the Internet connection line from London to Frankfurt, Net-Build is able to guarantee their customers a fast and secure connection.

A high level of security applies to both entry control and the operation of the new Data Centre. Customers will benefit from being hosted by a Data Centre that saves the environment 107 tons CO2 per year by using the most modern technologies.

Net-Build customers are ranging from small private organisations to bigger industrial businesses and already 2 months after the inauguration of the facility, almost 1/3 of the racks are filled with servers. 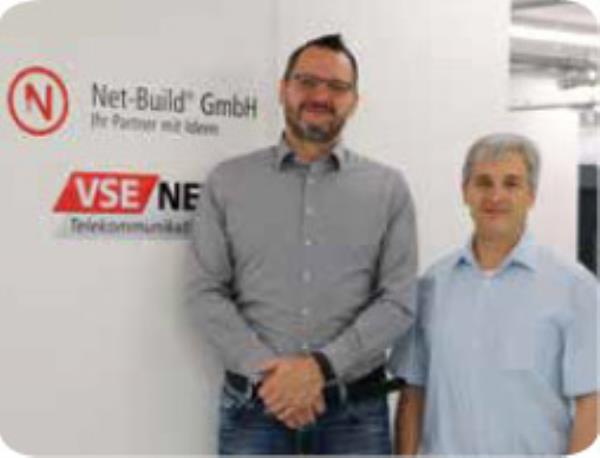 Net-Build can host up to 12.000 servers in 320 racks, placed in 2 identical, (but of safety reasons separated) and mirrorhanded rooms.

To prevent drop outs in case of failure in the mains supply, the Data Centre is equipped with double emergency power systems, ensuring that a break down is only a theoretical issue.

To cope with the heat load generated by the servers, installation of efficient cooling was crucial. With an IT load in the Data Centre of up to 2 MW when fully loaded, E-TEC and Munters specified 8 pcs. Oasis™ 200 units for the facility. The units were designed to be installed on the roof, directly above the hot aisles, whereby expensive duct work and loss of static pressure could be avoided.

The erection of the building was completed in only 6 months and Mr. Bohn, Net-Build GmbH, expresses his satisfaction with both the building and the cooling system:

“Our Data Center stands out by being extremely energy efficient, with a calculated PUE below 1,2. At the same time the safety is in top, and since the Munters cooling system is running without or chilled water, the operational reliability is very high”.

The 8 Oasis™ 200 units placed on the roof are grouped to match the interior lay-out with 2 mirrorhanded rooms. Each section has one OASIS unit kept for redundancy. 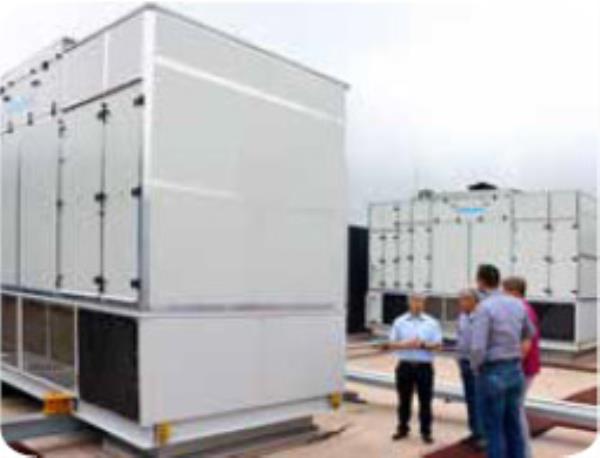 The Oasis™ 200 units are placed on the roof, directly above the server aisles.

The design condition in the server aisles is laid out for a temperature at 20°C, allowing a max. temperature at 24°C. In case of very hot summer days, an integrated 36 kW DX chiller will start operating, which is expected to be necessary in only 4% of the time. For the remaining 96% of the year, the indirect air-side economizer based on a polymer-tube heat exchanger will supply the cold air.

This air is led to the buildings cold aisle and distributed into the hot aisle through openings in the floor. The warm air from the servers is exhausted from ducts in the ceiling and returned to the Oasis™ units.

This principle also excludes the risk of pollution from outside air, since the air recirculates and eliminates the need of further filtration.

The Oasis™ units are all connected to the facility’s BMS system allowing for easy surveillance and control. To learn more about the Oasis™ principle: www.munters.com/Oasis