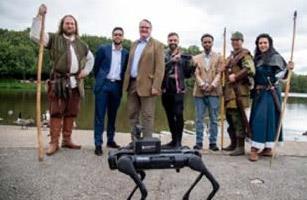 A data-collecting robot dog, internetcontrolled drones and a 5G upgrade are among technology being trialled by Nottinghamshire County Council to enhance the visitor experience at Sherwood Forest.

Birmingham City University has provided the site with the robot dog, which will collect data and upload it via the 5G connection.

If the trial is successful, the dog will gather data from areas that are usually inaccessible to help monitor and assess the health and condition of the forest environment.

The authority said the £10m investment would make it the world’s first 5G-connected forest and hopes to offer visitors an augmented reality headset to view an immersive Robin Hood-themed film.

The trial also covers the area around the forest, including Rufford Abbey and has been part-funded by the government’s Rural Connected programme. Moreover, it is also hoped the 5G technology will help businesses in the area.

Councillor Keith Girling said the 25-month project had the potential to attract “millions” of pounds of tourism trade.

“It’s going to draw attention to Nottinghamshire, which has got to be a good thing for investment,” he said.

The forest will also feature what is claimed to be the world’s first interactive holographic film called An Arrow In Time. Using augmented reality headsets, the production features well-known characters from the legend of Robin Hood.