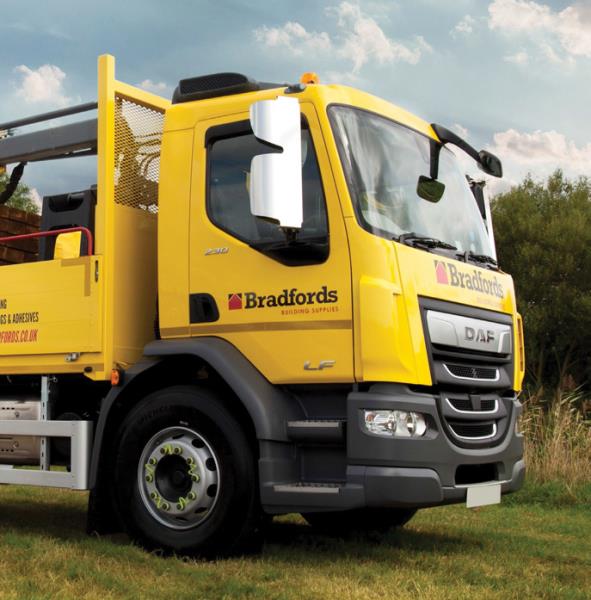 When Martin Caddick joined the Bradfords Group as head of transport, based in Yeovil, Somerset, the company already had a telematics system in place, but found that it wasn’t comprehensive enough.

“The previous system did not provide the key metrics we required, and was difficult to use,” he says. “The lack of user friendliness made the system virtually unworkable.”

Because of this lack of simplicity, Caddick says it was difficult to monitor the company’s vehicles.

Knowing the precise location of vehicles is essential for communicating delivery status to customers or retracing a vehicle’s movements.

Caddick also wanted to uphold the Bradfords brand by monitoring and minimising non-compliant driving behaviours such as speeding.

The company, established in 1770, is a progressive organisation with over 40 branches throughout the South West of England, including Herefordshire and Worcestershire.

It currently operates a fleet of 700 vehicles that range from forklifts to cars to pickups and Large Goods Vehicles (LGVs).

Ultimately, it was the combination of Geotab’s capabilities and the reseller’s customer service that convinced Caddick and his colleagues that it was the right choice.

The company implemented Geotab in 2018 and Theresa Heal, transport manager for the Bradfords Group, says it was a painless process.

“For anyone who has been less than positive about it, we’ve explained that it’s a level of protection to them as well, and I think they buy into that once they’ve seen it. Generally, telematics has been in the UK. market for quite some time,” Heal says. “So, every single driver who is qualified in the UK. will be aware that it’s just a thing that you learn to accept in a company. Maybe 10-years-ago, there was a lot of push back about having a tracker. But the reality is its pretty non-existent now and everyone is quite open to it.”

The Geotab solution has been installed on all of the fleet’s commercial vehicles — vans, pickups and LGVs and Caddick believes it may be some time before he’ll be able to fully quantify all of the benefits the company has netted from using it.

However, with his experience using telematics and managing fleets, he can make some educated predictions about other benefits the company can expect.

“I would expect that we would see some reduction in brake wear because of the reduction in harsh braking,” he says. “This is because people are driving the vehicles differently and they know they’re being monitored. In terms of what else have we actually experienced, it’s hard to say because we haven’t got that much data behind us, but I know what we are going to experience and that will be a reduction in cost and, hopefully, fewer incidents.”