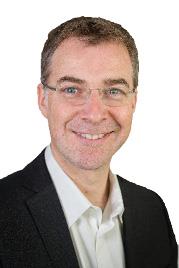 1. What was your big career break?
I remember exactly - it was when I joined RSA as a Sales Engineer in the 2000s. Before, I was a consultant working for customers in France in the Identity and Access Management domain. And suddenly I’d joined a cyber security vendor working as an engineer supporting the sales team. I had the feeling of jumping into a high-speed train, and it was super exciting. I discovered how cybersecurity (named IT security at that time) was truly fascinating.

2. Who was your hero when you were growing up?
John Lennon. I was a big fan of the Beatles (all four of them). But more than just the quality of their music — it was rich, punchy and sophisticated. That said, John Lennon was a true icon. Funny and ironic, musically great, but also engaged in human causes.

3. If you had to work in a different industry, which one would you choose?
The music industry. Playing guitar and bass, I perform sometimes on stage and it’s always a great experience. I do this purely for non-profit organisations and occasions — It’s not really an “industry” in the true sense, but is a domain that I’m personally engaged in.

4. Where would you live if money was no object?
In a country house near the sea and mountains. I’m unequivocally a country man, and I love both mountains and sea. Whenever I want to recharge I drive to a country house. Once practical again I plan to go further and do some hiking in the Alps or relaxing close to the sea.

5. Which law would you most like to change?
The death penalty where it is still practiced. In those countries where it has been abolished, including France where I’m based, it has been a major step forward. I’d like to see similar progress elsewhere until it’s confined to history everywhere.

6. The Beatles or the Rolling Stones?
Definitively the Beatles. They revolutionised music, they were energetic, funny, powerful and inventive. When they played together, a real alchemy was palpable. They inspired me immensely. John Lennon, of course, but also Paul McCartney were arguably the best rock and pop songwriters, and that remains true today. Paul McCartney is always optimistic, and always renewing himself. I’ve been lucky enough to see him four times on stage, he is an idol.

7. What’s the strangest question you’ve ever been asked?
Someone asked me once, while on a plane, “what if the wings come off? Do you think the plane can still fly?” I was a bit like…. “what?”

8. If you could dine with any famous person, past or present, who would you choose?
Steve Jobs, who has inspired me immensely in my career. He’s a visionary man, with a huge sense of communication. Passionate about new technologies and he really changed the world. In a different way, he’s close to John Lennon’s mind-set. He once came to Paris, and I was lucky enough to get some tickets for one of his Keynotes. He was inspirational, and I still remember it like it was yesterday. He captured the attention. He was sharp and inspiring.

9. What’s the greatest technological advancement in your lifetime?
The iPhone. Internet in a Phone as they are tightly linked together. This was the technical “revolution” of my lifetime.
When I was young I was a big fan of Star Trek, and I was fascinated by the little pocket phone they used to communicate, by just opening it and talking. That was science-fiction.

Communicating with everyone in the world, and even today seeing them through a little portable device from our pocket, I’m still impressed by that. Like the little boy I was, watching Kirk and Spock.

10. What’s the one possession you can’t live without?
My first reaction would be: a house for my family as a “possession”, this is the most important thing for me. If the question was more an “object”, then something to play music or hear it. I always have music in my head. All the important moments of my life have been punctuated by music. Every memory has its song.