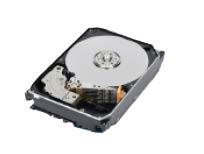 New hard drives from Toshiba are the company’s first to feature energy-assisted magnetic recording. This, it says, raises the capacity of each of the nine disks to 2TB for a total of 18TB – 12.5 per cent more than the previous models.

They are said to be compatible with the widest range of applications and operating systems and are adapted to deal with mixed random and sequential read/write workloads.

Toshiba says its new drives offer lower capital costs – leading to reduced total cost of ownership – for use in on-premises rack-scale operations and cloud and hybrid-cloud use.

With a form factor of 3.5in, able to fit standard bays, they are said to deliver 7200rpm, with a 550TB per year workload rating, and a choice of SATA or SAS interfaces. toshiba.semicon-storage.com