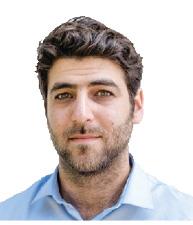 What was your big career break?
When Mickey, Guy and I founded Semperis everyone said that Active Directory, the Microsoft product that manages the identities of 90% of global organisations – which we provide the protection for - will vanish from the world. We believed it wouldn’t. Investors, customers and experts said that in 5 years no one will use it. But we believed that cloud adoption by organisations will only increase the importance of Active Directory. Around 2018 we finally started seeing a huge increase in our product’s demand. Gartner, the globally recognised research and advisory firm providing information to organisations, also changed their report saying that Active Directory is not only here to stay but it would be critical for organisations. It was then that we knew we are doing something right.

Who was your hero when you were growing up?
That is a difficult question because I had several people that I looked up to, so I have to go with two answers. First are my parents who always made sure I had everything I needed, often putting my needs first by sparing themselves. They gave me the education, love and confidence to chase my dreams so they were a huge inspiration.

The second one is Michael Jordan. Growing up, I would have classed myself as a below-average basketball player. Like any other kid I wanted to be like Michael but around the age of 16 I understood that there is no way that this would happen for me. But following Michael Jordan’s career, I learned several important things. Michael wasn’t always the most talented guy but he was always the one who worked hardest. He would practice twice as much as the other players on his team, he found motivation in any place he could, even when someone told him this can’t be done. When Michael became a star he knew how to push his teammates to do the same. Jordan made so many concessions to get to his end goal and for me this is dedication. All the above are values that I aim to live by.

What’s the best piece of advice you’ve been given?
At the beginning of Semperis one of our mentors told me that working for a start-up is like a rollercoaster; “You will have ups and you will have downs” he said, “always remember to celebrate your wins because you will be down at your losses”. A start-up is a marathon and you simply won’t get far if you only wait for the big break. You must enjoy the ride.

What’s the strangest question you’ve been asked?
I was once asked if a pickle is originally a cucumber.

What would you do with £1m?
I don’t think that I would do anything different with £1m. I would maybe invest in Happel Tel Aviv youth group, the soccer team I’m a fan of and they might get a little less terrible with a nice investment.

If you could live anywhere, where would you choose?
My job took me all around the world for short and long trips, I really feel like I’ve seen so many places, but I can certainly say there’s no other place like Tel Aviv. This is the best city in the world, open 24/7. Great restaurants, bars, beaches and the nicest people everywhere. No matter how old are you or what are your interests and hobbies Tel Aviv will have what you want and need.

What’s the one thing you must do before it’s too late?
I’ve never had the chance to visit Australia and I’ve heard it’s amazing. I would really like the opportunity to surf in Sydney and while I’m already there take a quick trip to New Zealand as well.